The Park Ridge Depot Square stores have an important link to Park Ridge history. The square was fully funded and built in 1871 by the residents of “Old Pascack”, 14 years before the founding of Park Ridge. The arrival of the railroad in 1871 created the perfect environment for commerce and it became the home of many different stores, including a general store, barbershop, real estate office and a butcher.  The Depot Square Stores are located in between Park Avenue, Hawthorne Avenue, Market Street, and the train station. 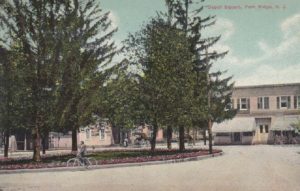 The buildings housed many businesses of Park Ridge’s founding fathers, including that of William B. Smith. Mr. Smith was a major landowner who began an unsuccessful silkworm farm and located his business office in the square. Undeterred by the failure of the farm, Smith created and presided over the Park Ridge Improvement Association, the group that brought about the founding of our town. With the silkworm business shut down and Park Ridge heading toward incorporation, Mr. Smith began to segment his land into marketable properties and his office in Depot Square became W.B. Smith Real Estate. 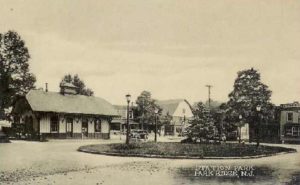 The most significant building (other than the Depot itself) is the three-story A. Foisy Dry Goods store. Standing on the corner of Park Ave. and Hawthorne Ave. with a flat Mansard roof, it served notice that Park Ridge was going to be a town of prominence.  Its structure has stood for over 100 years and currently houses CycleSport.