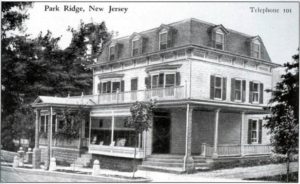 The Park Avenue Hotel is an important landmark that represented the commercial success of Park Ridge. The hotel was located on the corner of Park and Maple Avenues and served as a primary spot for temporary residents. The hotel, being so close to the train station, allowed business to prosper and profits to boom. It was built in 1870 by C.A. Schappie as a way to entice people to visit and do business in Park Ridge. The hotel, as time went on, passed through a number of hands. After Schappie, John J. Perry and his wife lived in and owned the hotel and added a barn to the hotel property. 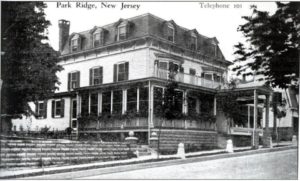 Like all inns at the time, the Park Avenue Hotel imposed a set of rules. These rules were close to universal for all hotels. For example, dogs were not allowed upstairs; beer was not allowed in the kitchen; boots could not be worn to bed; organ grinders had to sleep in the washhouse.  In the early days’ breakfast and dinner could be had for only 37 cents and a horse could be stabled just 30 cents, expenses easily affordable for a traveler. Through the years of its existence, the Park Avenue Hotel played an important role in helping the community grow.